It’s been a great year for me and as it comes to an end I am reflecting on the goods and the bad.Although some things didn’t go as expected I have so many blessings I have to count on.We often think that we don’t get enough of what we need but if you step back and look on what you have I think we have more than enough….

Most people tend to complain that they never have enough but what is your definition of enough??

Is there a metaphor of the word “greediness “or just a need to be in trend with the society?

I would like to share with you Bob’s stories which was originally included in “Chicken Soup for the Grieving Soul”and now featured in a collection of Bob’s storiesbased on the eight wishes.
“I Wish You Enough: Embracing Life’s Most Valuable Moments…One Wish at a Time” (Hardcover)
Thomas Nelson Publishers
By Bob Perks

I never really thought that I’d spend as much time in airports as I do. I don’t know why. I always wanted to be famous and that would mean lots of travel. But I’m not famous, yet I do see more than my share of airports.
I love them and I hate them. I love them because of the people I get to watch. But they are also the same reason why I hate airports. It all comes down to “hello” and “goodbye.” I must have mentioned this a few times while writing my stories for you.
I have great difficulties with saying goodbye. Even as I write this I am experiencing that pounding sensation in my heart. If I am watching such a scene in a movie I am affected so much that I need to sit up and take a few deep breaths. So when faced with a challenge in my life I have been known to go to our local airport and watch people say goodbye. I figure nothing that is happening to me at the time could be as bad as having to say goodbye.
Watching people cling to each other, crying, and holding each other in that last embrace makes me appreciate what I have even more. Seeing them finally pull apart, extending their arms until the tips of their fingers are the last to let go, is an image that stays forefront in my mind throughout the day.
On one of my recent business trips, when I arrived at the counter to check in, the woman said, “How are you today?” I replied, “I am missing my wife already and I haven’t even said goodbye.”
She then looked at my ticket and began to ask, “How long will you…Oh, my God. You will only be gone three days!” We all laughed. My problem was I still had to say goodbye.
But I learn from goodbye moments, too.
Recently I overheard a father and daughter in their last moments together. They had announced her departure and standing near the security gate, they hugged and he said, “I love you. I wish you enough.” She in turn said, “Daddy, our life together has been more than enough. Your love is all I ever needed. I wish you enough, too, Daddy.”
They kissed and she left. He walked over toward the window where I was seated. Standing there I could see he wanted and needed to cry. I tried not to intrude on his privacy, but he welcomed me in by asking, “Did you ever say goodbye to someone knowing it would be forever?”
“Yes, I have,” I replied. Saying that brought back memories I had of expressing my love and appreciation for all my Dad had done for me. Recognizing that his days were limited, I took the time to tell him face to face how much he meant to me.
So I knew what this man experiencing.
“Forgive me for asking, but why is this a forever goodbye?” I asked.
“I am old and she lives much too far away. I have challenges ahead and the reality is, the next trip back would be for my funeral,” he said.
“When you were saying goodbye I heard you say, “I wish you enough.” May I ask what that means?”
He began to smile. “That’s a wish that has been handed down from other generations. My parents used to say it to everyone.” He paused for a moment and looking up as if trying to remember it in detail, he smiled even more.”When we said ‘I wish you enough,’ we were wanting the other person to have a life filled with just enough good things to sustain them,” he continued and then turning toward me he shared the following as if he
were reciting it from memory. 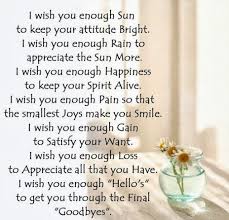 He then began to sob and walked away.
My friends, I wish you enough!
by
Bob Perks

as for me,I wish to all my readers that you have enough of whatever you need and more importantly I wish you enough…to close this year chapter and open a new one with new dreams,new aspirations,new goals and at last I wish you to pray for all the blessings you have…the world is a wild animal and could devour you open so think twice of what you wish for…